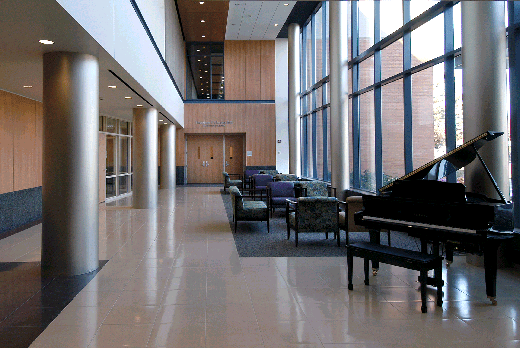 The Players:
At The Cleveland Clinic, integrated approaches aren’t just for healthcare. The world-renowned hospital, founded in 1921, is known for integrating its patient care, medical research and professional training. So it’s no surprise that when South Pointe Hospital, one of eight community hospitals in the Cleveland Clinic Health System, underwent a major renovation, integration played key roles in the HVAC hardware installation and controls solution as well.

“Our relationship with Comfort Control Group, our history with Automated Logic and our confidence in their products made the difference,” commented Mark Kaczmarek, South Pointe’s Manager of Facility Engineering. The hospital’s history with ALC includes a control system which had been serving the facility for 15 years.

The Solution
Completed in 2003, the installation features BACnet® integration to the new mechanical equipment installed by Cleveland mechanical contractor Coleman Spohn Corporation: two Trane® chillers, a Systecon® pump package, Mammoth® penthouse unit and Tek-Air® room pressure monitors. Comfort Control Group also replaced the pneumatic controls, still operational in the renovated area, with a DDC package. Cooling towers were relocated and tied into chillers which remain on the former ALC control system and continue to serve a portion of the acute care center. That system was integrated into Automated Logic’s web-based WebCTRL® system. Facility management personnel are using desktop computers in three locations to access and control the system: one in the outpatient center, one in the acute care center and a third in Kaczmarek’s office.

The entire installation was phased in as ICU, surgery and support departments moved into the new space. All that would be challenge enough – but the project included a critically timed chiller shutdown and removal as new chillers were installed.

“BACnet integration enabled hundreds of points of information to be transferred from the mechanical equipment control package to the WebCTRL system through a communications bus, which lowered installation costs,” claims Brian Wagner, Comfort Control Group president (the project required nearly 6,700 hardware and software points combined). By using the hospital’s Intranet as the WebCTRL/BACnet communications backbone, we were able to reduce costs even more.

“These points allow the facility management staff to control the equipment, monitor the building and respond to alarms if any equipment falls out of operating parameters. The result is an easy-to-use system that provides more information and faster diagnoses for a more comfortable, energy-efficient facility with higher worker productivity,” Wagner continued.

“WebCTRL has saved us thousands of dollars in energy costs,” added South Pointe’s Kaczmarek. And Comfort Control Group’s performance exceeded our expectations. The need for in-service training on the system has been minimal. Our staff was already familiar with the Automated Logic system, so it was more a case of learning new graphics and new navigation.

“In addition, Comfort Control Group has been very flexible regarding our training needs. Brian was a great advocate for the hospital throughout construction, always looking out for our best interests.”