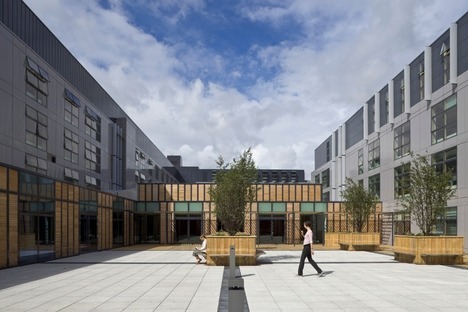 Ashburton Court has been home to Hampshire County Council (HCC) since the 1960s. The concrete building was not exactly pleasing on the eye and it was also very inefficient, with a carbon footprint of 100Kg of C02/m2 per annum. Rather than knocking the building down, HCC decided that it would be more cost effective to refurbish the existing building as it was estimated that a complete new build would have been double the cost of the refurbishment. Turning the inefficient Ashburton Court into energy efficient “Elizabeth II Court”, as the building has been renamed, would be a challenge for all involved and the Building Energy Management System (BEMS) would play a crucial role in fulfilling this challenge.

The end product is one of the best performing buildings in the country, expecting to secure a BREEAM (Building Research Establishment Environmental Assessment Method) EXCELLENT rating which recognises low environmental impact buildings. The architects, Bennetts and Associates and the building services consultants, Ernest Griffiths have a proven track record in delivering innovative sustainable building solutions, including the naturally ventilated headquarters of POWERGEN in Coventry and the headquarters of SOPHOS in Abingdon. Building Technology Systems Ltd. having worked on these and other high profile projects, were engaged directly by the main contractor, BAM Construction, to supply, install and commission the BEMS. The project delivery was managed by MACE, on behalf of HCC ,and the first phase (East Block) was handed over in December 2008, with the subsequent West and North Block phases completed in June 2009.

The Carbon Trust have been actively involved in monitoring the project and are using the building as a case study in their Low Carbon Building Accelerator (LCBA) programme, which develops the argument for cost effective refurbishment of existing non residential building stocks into comfortable energy efficient buildings.

The Carbon Trust reports that buildings are responsible for approximately 40% of carbon emissions in the UK, but while there is a growing focus on the carbon efficiency of new-build, this represents only 1.5% of the UK building stock each year. The Low-Carbon Building Accelerator on the other hand, focuses on energy-efficient refurbishment of non residential buildings. As more electrical equipment, like PCs, are installed in structurally outdated buildings, it becomes more and more difficult to maintain a comfortable working environment. With buildings typically needing a major refurbishment every 20-30 years, the Carbon Trust’s Low-Carbon Building Accelerator (LCBA) aimed to bring a whole new approach to refurbishment projects. It encouraged owners to seize the opportunity of a major refurbishment to install cost-effective, energy-efficient measures in the building’s fabric and services.

Automatic windows on the courtyard side of the buildings are opened in conjunction with chimney dampers on the opposite side to allow fresh air to enter and cool the building. The fresh air is drawn through the building and up the stacks to exit at roof level. The BEMS controls the opening and closing of the windows and chimney dampers at night to provide night cooling. The night air cools the exposed concrete soffit. The reason for doing this is to stop the building heating up too quickly the following day. During the day the BEMS opens/ closes the windows and corresponding chimney dampers to control the indoor temperature and C02 levels. Local user switches can override BMS control of the windows for a set time period before it returns to automatic control.

When natural ventilation is not an option due to external conditions (wind, rain ingress, outside air temp), the BMS will bring on the relevant air handling units (17No total) which use reclaimed energy from the Data Centre condenser water circuit. In the case where room C02 levels rise above a certain set point, when the AHUs are running, the chimney dampers will open automatically under BMS control. The BMS will look at external conditions (wind speed/ direction and rain) and the control algorithms will make a decision as to which windows can open whilst maintaining a safe, comfortable and healthily environment.