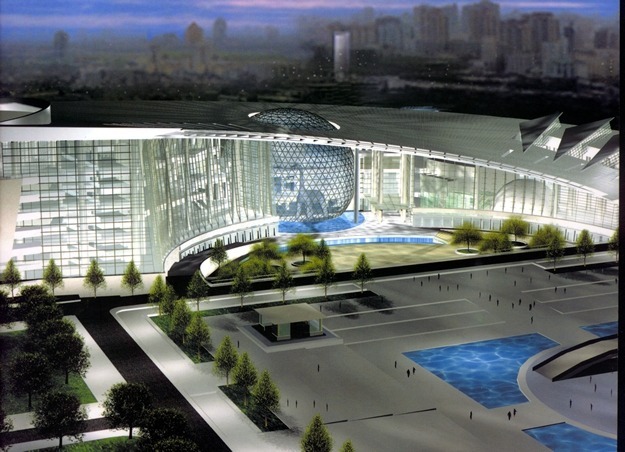 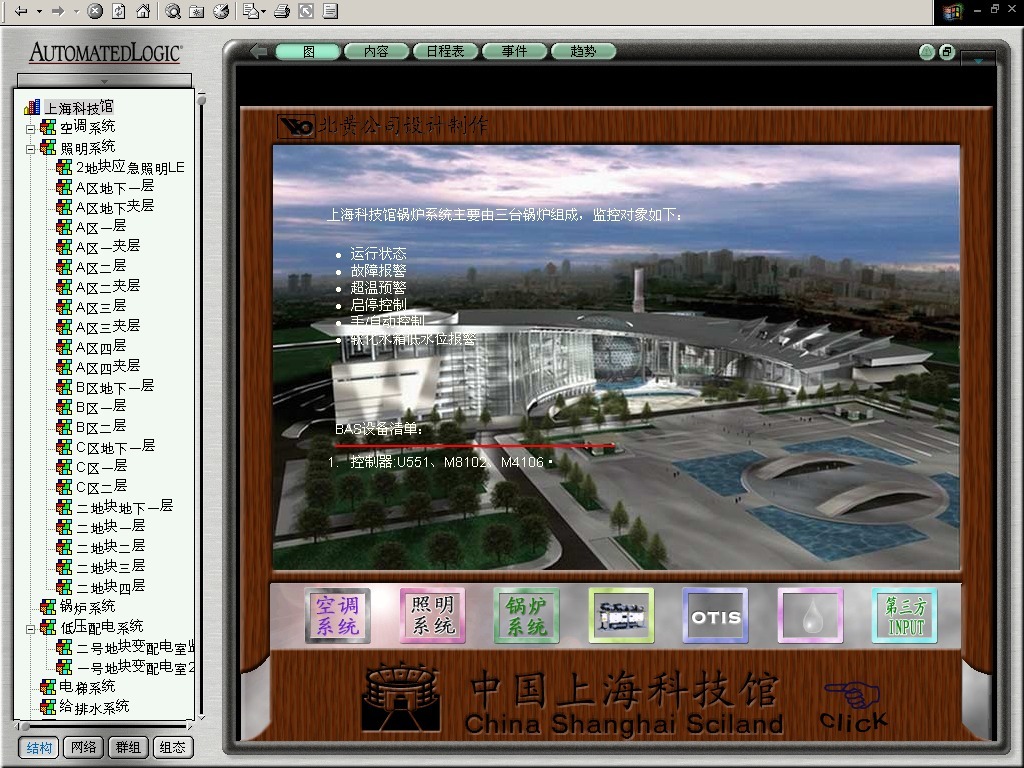 Situated in China, in the midst of Shanghai’s beautiful Pudong financial district, is an awe-inspiring architectural monument to man’s quest for scientific truth. It is the new Shanghai ScienceLand Museum. This world renowned project showcases the very best in every field and Automated Logic Corporation is proud to be among the elite selected to participate in this $180 million project. The museum encompasses over 732,000 sq.ft., or 17 acres (68,000 sq.m.), and five major halls. Automated Logic’s local dealer faced the challenge of applying cutting edge technology to the project across a wide variety of environmental requirements. To meet this challenge, Automated Logic’s WebCTRL system was selected because of its superb browser-based user interface, native BACnet open protocol, and its ability to utilize Chinese character fonts.

With approximately 3,200 control points and 1000 third party integration monitoring points, the dealer and the Automated Logic corporate office worked together to create a Chinese user interface to meet not only the requirements of this project, but also all future Chinese projects.

A wide diversity of areas required equally diverse control requirements. The architect, RTKL out of Los Angeles, worked with the Chinese government to create a union of halls that represent the symphonic harmony of nature and mankind. As a result, five major halls addressing the topics of Heaven and Earth, Life, Wisdom, Creativity and Future were created. In addition, a 75,400 sq.ft. (7000 sq.m.) central hall, an exhibition hall, and two IMAX theaters were added to the design. Each of these areas presented their own unique requirements for environmental control.

Over 100 air handling units, 300 exhaust and circulation fans and 7 heat recovery units are required to maintain environmental control in areas ranging from a marine and freshwater aquarium hall, to a large aviary to a greenhouse nursery. Other areas were equally challenging. A “hydro-power generation room” complete with small lake and dam, an indoor activity area with rock climbing, areas with custom lighting, physics exhibits, mechanical and electrical exhibits, all of which produce widely varying loads, all created unique challenges for the controls contractor.

A project of this magnitude requires a control system flexible enough to interface with a multitude of vendors, providing monitoring, alarming and trending capabilities through one system. One of the greatest benefits of an open protocol, browser-based system is the ability to do this, presenting all vendor information graphically through one unified control system. While there are still many proprietary protocols in use, many vendors are beginning to see the benefits of converting to an open protocol based system. On this project, the following third party systems were brought together and presented by the BACnet supervisory system.

Close to 300 chiller system points from a Siemens/BAC thermal storage plant are being monitored, alarmed, trended and linked to the front-end graphics. Chiller statuses, pump statuses, temperatures, valve positions, setpoints, and mode of operation are all being translated from a Siemens ASCII full alphanumeric protocol into BACnet, presenting all the data through the BACnet supervisory system.

Over 200 life safety and fire system points from a Siemens/Cerberus Fire Alarm System are being monitored. Such points as pull station statuses, smoke detector statuses, fire alarms and fire protection pump statuses are all being monitored, alarmed and trended, retrieving the data from a Siemens/Cerberus system via a BACnet translator. Up to 70 doors are being monitored for open, closed and alarm statuses through a Ultrak Access control system. Information on these points is being brought into the BACnet system so they can be alarmed and trended at the central site computer.

Six ITT Bell & Gossett variable frequency drive panels are also being monitored. Each panel controls their own group of pumps modulating to maintain various chw loop pressures. These panels are already networked together by BACnet, so it is easy for the WebCTRL system to monitor such things as temperature, pressure, pump statuses, VFD statuses and alarms. All of these points are alarmed and trended at the central site computer.

A Westinghouse-Cutler Hammer power monitoring system provides data such as breaker currents and voltages, to the central system via custom html webpage format. This format allows the data to be presented to the building operators as part of the WebCTRL system, allowing for easy monitoring along with the other systems through a single supervisory system.